Wasp nest identification is fairly straightforward when you know what to look for. We have written a few notes below to help you identify and find wasp nests, this will help you know what signs to look out for.

If you are constantly harassed by wasps when out in your garden, then it is most likely a nest is close by OR there is a food source which scout wasps have found and relayed the position of back to the nest. Wasps will seek out sweet foods and dead flesh. Lyme and Oak trees are also a major problem as they are dripping in sweet sap.

Wasps do swarm feed, so if a foraging wasp has found a source of food, it will go back to the nest to recruit other wasps to join in feeding, so in a very short space of time one wasp can become hundreds. If you are constantly harassed by wasps in your garden, identify the problem, such as sweet foods lying about, or dead flesh in bins. Wasps will also look for dead wood as a source for nesting material, if you have lots of wasps stripping wood from fence panels or shed walls and they are becoming a problem, treat the affected area with Cuprinol.

If you are certain that a nest is present, simply standing and watching for a few minutes is normally enough to establish the flight lines and determine where the main activity is concentrated, this is where the nest will be located.

If you are finding wasps inside your house on a daily basis, there is a chance that you may have a wasp nest within the building. Very often wasps find their way into the house from the loft space through small gaps and cracks in cupboards and also badly fitting loft hatches. We have noticed over recent years that wasps are also attracted to “Down lights”, these particular lighting systems also tend to show light into the loft space as well as the room they are intended to illuminate, the wasps are attracted to the light and fall through the small gap between the light bulb and the metal casing.
Wasps CAN and DO build their nests inside houses, we have treated wasp nests in bedroom cupboards, nests that have been coming through living room ceilings and many others that are in equally surprising locations.

Locating wasp nests in the ground is slightly more difficult, simply because very often the hole is partially covered or camouflaged with leaves and other ground debris. However, if wasps can be seen on a regular basis coming and going in a certain area, then a few minutes just watching and following them can reveal where the nest is,

English wasps (Vespa Vulgaris) also known as the common wasp, generally build their nests inside something, this can be a roof space/loft, garden shed, inside an air brick or even in the ground, it is very common to find common wasp nests in disused vole and rabbit burrows. Basically they build their nests anywhere that they find suitable and where it is protected from the elements and is undisturbed.

At the end of the year when the frosts arrive any fruit that has been edible starts to perish quickly and as human activity changes, wasps start to starve as food becomes increasingly hard to find. Wasps need food with a high energy (sugar) content to maintain flight. Flying takes a lot of energy. As the food sources disappear, the adult worker wasps start to die off.

German Wasps (Vespula Germanica) also known as the European wasp are slightly larger than the English wasp and they build their nests in bushes, trees and hedgerows and at a first glance the nest resembles a grey football. The nest itself is made in exactly the same way as the common wasp nest, using chewed wood and saliva to make a paper maché material. The nest material is strong, lightweight and surprisingly waterproof. 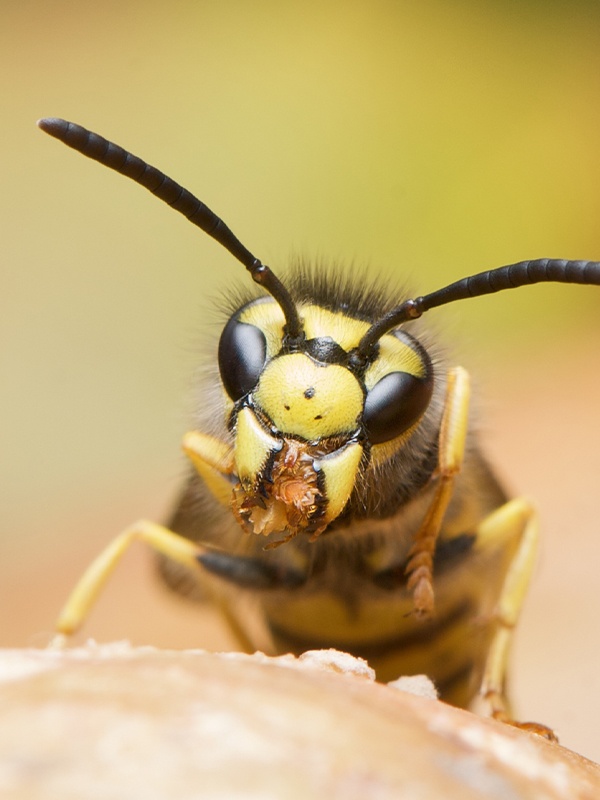