How we survey your drains

Drains only need a CCTV inspection if your buying a property or a blockage seems to be re-occurring.  Once the jetting has been carried out & the blockage removed, only then can we expect to get the camera head down into the pipe to investigate the problem.

The CCTV camera is put down either downstream or upstream & pushed down to where the fault is expected to be.  We can see on our coloured monitor the distance travelled etc. adjust the lighting on the camera head & record the whole procedure.

How we clear your blocked drains in Wokingham

After an initial survey of your problem, we can try some of the techniques at our disposal.

When we get to a blocked manhole chamber we’ll often use a professional multi swivel drain rod, using just one 2 metre rod & give it 3-4 plunges which will normally clear the blockage.

DO NOT use cheap DIY drain rods as they often come apart whilst in the drain, Oh yes!!

If the blockage doesn’t go straight away we will then use high pressure water jetting equipment. Sometimes there is so much solid paper we just need to add lots of water to get the blockage & obstruction moving and to clear into the main drain.

If the blockage is severe & we are unable to clear with manual rodding, then high pressure water jetting will be your next course of action.

Most household taps are supposed to deliver around 8 gallons of water a minute but generally don’t!!

Most of our call out for blockages are dealt with quickly and fall in to a one hour job for your drain cleaning Wokingham.
Knowing and having access to all manholes will really help our team.

The worst pipe material you can have on a property is a 4” or 6” bitumen fibre pipe, these easily disfigure and cause regular blockages. The best course of action is to replace if possible. Pipe relining can cause it’s own issues with these pipes!  This is why solicitors will always recommend that you have a CCTV survey carried out prior to purchasing a property.

Most often this is due to misuse coupled with a defect of some sort. This can be joints being out of correct alignment, stepped joints, sections which dip, poorly fitted joints allowing in fine roots or insufficient support under the pipe. These can all lead to fractured or leaking pipes, they will still work but at some point a flaw will become a serious fault.

A fault within a drain run usually results in a blocked drain, but this doesn’t necessarily mean that you will have foul water backing up out of your exterior drains.

By the time we get called out, most people have been blocked for days / weeks!

Many blockages clear themselves before you notice them, simply due to the force of water coming up behind them. Some other systems end up operating like an impromptu septic tank and can do for many years. You may not even notice, but given the right conditions in the surrounding soil, most of the waste water sent into the drain is released through breaks in the pipe and soaks into the soil. While the liquid leaks away, solids and waste are left within the pipe system, breaking down and slowly dissolving into the waste water.

Although defects in drain runs are the primary cause of problems, other factors can exacerbate the situation, e.g. fat, wet wipes, cotton buds & all ladies sanitary items being flushed down the toilet.

The drains which your down-spouts connect to, as well as waste water pipes from sinks, feature a water trap to stops smells (and rats) from the drains escaping to ground level around your home. The trap also helps stop blockages by keeping detritus from getting into the drain. Failing to keep them clear can be a recipe for a blocked drain.

Fatty residue washes down the plughole and builds up within the drains, especially the water trap in the kitchen waste gulley. As soon as the grease comes into contact with the cold water it starts to congeal and cling. Over time most drainage systems eventually lose some of their efficiency due to the build-up of fat.

The most prevalent cause of blockages in drainage systems is usually because the householder (or the previous occupant) put things down the pan which really should have gone in the bin. Nappies, sanitary products, ear buds, wet wipes and dental floss are the most common culprits.

Most problems with the loo are caused by either a foreign object being flushed away or a problem further down the line. Don’t put anything in the toilet that could block the pipe, and that includes using too much toilet paper!

Aside from fats, leftovers and other debris from your kitchen ends up disappearing down the sink, the other primary source of blockages is hair. Especially where you have a problem with grease already, this mixes with the hair and forms a surprisingly strong blockage.

Showers are difficult to get into & a home owners NUMBER ONE priority is looking after them.  You should regularly apply bleach / lime scale remover in generous amounts into the shower outlet & leave overnight. This will dissolve hair, lime scale, body fat & soap etc. from the small waste pipes and traps and hopefully avoiding major works to access the enclosed pipe work!!

We require clear access into the shower waste pipes which is normally impossible.  Going through the shower outlet is NOT an option!!

Pipes are fairly fragile things, especially vitrified clay pipes. If they were installed without due care and attention or if they are disturbed by subsequent works (such as an extension being built or even a fence post being driven a little too deep in the wrong place) you can often find that problems can take some time to become apparent.

Roots have evolved to seek out water and nourishment for plants and trees, and these are to be found in abundance in your drains. Any defect in how the drains were constructed can lead to a tiny leak, which in turn attracts roots, which can be surprisingly strong. They can get in through poorly aligned joints, cracks and flaws in inspection chambers. 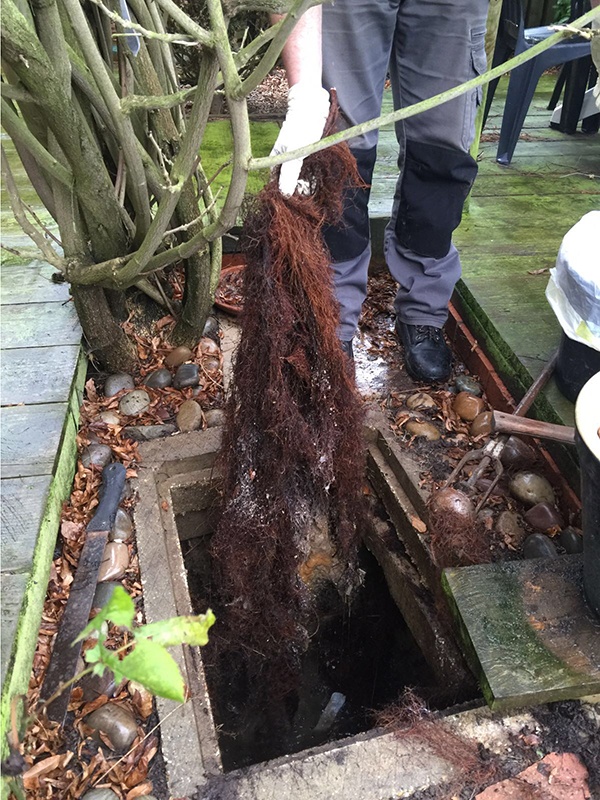