I am always dismayed at the lack of understanding with regards to de-mossing of roofs.  I’ve seen many a builder/door knocker & indeed roofing contractor all offering forms of moss removal Wokingham and other local areas either by hand or jet washing only to find that a year later the moss starts to re-grow!

This is because your contractor wasn’t experienced & should have realised that the moss spores need to be killed off first using the correct chemical treatment.

We have two different chemical treatments on offer, both very effective, one more environmentally than the other which will leave an active residue on the roof tiles for up to 5 years and needs to be applied on the first visit then allowed to kill off the moss over a 3-5 day period.

Two options, we can remove the moss first then treat the roof with the chemicals to prevent re-growth.  Generally, if the moss build up is heavy then we would chemically treat the roof first, this helps to speed up the process of moss removal when we return.

This then gives you the option to do a final re-treat to the cleaned roof surfaces thus leaving a good chemical residue on the roof.

Lichen can be both white and yellow are circular in appearance and are almost impossible to remove entirely. If one tries too hard you’ll actually remove the tile surface leaving light blotches where the lichen was.

With regards to choosing a removal method of moss, e.g. by hand or using high pressure water jetting takes experience. As roofing contractors we know which tiles lose their pigmentation and which ones won’t, but if we’re in any doubt we would always check prior to providing an estimate as removing moss by hand is more labour intensive & expensive than that of using a jetting machine.

We have a full range of access equipment to choose from which will be made available & added in to the costing of the de-mossing works.

Concrete tiles that are very old & pitted would naturally benefit, however, by re-painting it seals the surface of the tile & prevents moss re-growth for a greater length of time. It’s just a question of extra cost which is considerable.

Some unscrupulous contractors will deliberately jet wash the pigment out of the roof tile then try & sell you a re-paint!  You have been warned! 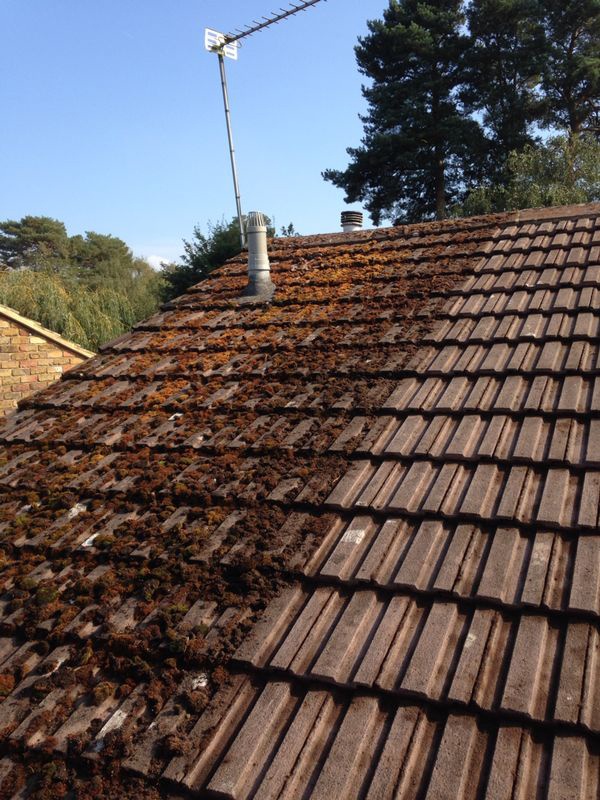